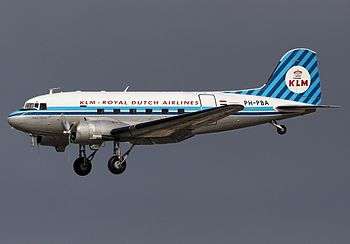 An airliner is a type of aircraft for transporting passengers and air cargo. Such aircraft are most often operated by airlines. Although the definition of an airliner can vary from country to country, an airliner is typically defined as an aircraft intended for carrying multiple passengers or cargo in commercial service.

The largest airliners are wide-body jets. These aircraft are frequently called twin-aisle aircraft because they generally have two separate aisles running from the front to the back of the passenger cabin. These aircraft are usually used for long-haul flights between airline hubs and major cities with many passengers.

A smaller, more common class of airliners is the narrow-body or single aisle aircraft. These smaller airliners are generally used for short to medium-distance flights with fewer passengers than their wide-body counterparts.

Regional airliners typically seat fewer than 100 passengers and may be powered by turbofans or turboprops. These airliners are the non-mainline counterparts to the larger aircraft operated by the major carriers, legacy carriers, and flag carriers and are used to feed traffic into the large airline hubs. These regional routes then form the spokes of a hub-and-spoke air transport model. 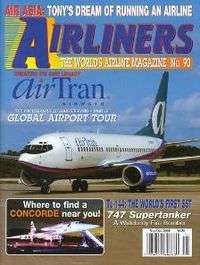 Airliners is an American magazine dedicated to the airline industry. Six issues are circulated each year. The title was first published by World Transport Press in 1988. Since the 100th issue (July/August 2006) it has been produced by Airliners Publications, LLC.

The magazine includes articles about the world of commercial aircraft and air carriers, including new low cost airlines, changes at legacy companies, jetliners such as the Airbus A380 and Boeing 787, trips around the world, historical airlines, adventurous flights, airliner crashes and pictures of airliner liveries.

The magazine's first editor was John Wegg. Subsequent editors were Bryant Pettit, Nick Veronico, Jon Proctor, David Kaufman and Jay Selman. Starting with the November/December 2007 issue, the editor was Dwayne Darnell. On December 11, 2009, Darnell announced that he was leaving, and that designer/Creative Director Robert Christensen would lead the magazine.

Did You Know: A Potential Investor Wanted To Rename Southwest Airlines To Faith Airlines In ...

Public Technologies 07 Dec 2022
"Even if you start small, be grateful for your opportunity and work smart," is the advice to those starting out in the workplace from John Berry Anga, Solomon Airlines Revenue Accountant ... He started with the national carrier in 1995, working in the revenue section of the airline's Finance Department.
Edit

The airline policy that cost pregnant flight crew their jobs

Global airlines to narrow loss in 2022

The Epoch Times 07 Dec 2022
Australia’s consumer watchdog has started to scrutinise local airlines after finding airfares have increased dramatically since early this ...
Edit

How Hawaiian Airlines Continues To Fly With Volcano Eruption In Hawai'i

Philippine Airlines To Launch Flights To Perth In 2023

Simple Flying 07 Dec 2022
Philippine Airlines has announced that it will launch flights ...
Edit

Air transport body expects airlines to return to profitability in 2023

Anadolu Agency 07 Dec 2022
The International Air Transport Association (IATA) on Tuesday said that the global airline industry would return to profit next year for the first time since 2019.
Edit

Zeenews 07 Dec 2022
The Flybig aircraft VT-TMC was due to depart from Patna airport for Guwahati but had to be grounded by DGCA after a fuel leak was noticed in the plane, reports ANI ... .

Saudi’s MBS rolls out the red carpet for China’s Xi, in a not too subtle message to Biden
CNN
07 Dec 2022

AP / Alessandra Tarantino
3.5 BILLION could be injured or killed by the jab. Are YOU ready —Dr. David Martin interview - Bitchute.com
WorldNews.com
07 Dec 2022 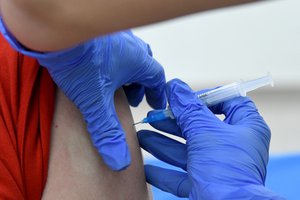